Former New York Rangers “Bad Boy” turned Dancing with the Stars Star Sean Avery is Arrested in NY on Drug Charges Pursuant to an Investigatory Traffic Stop for his having Thrown Objects at Moving Cars… Scroll down to read more!

October 13, 2015 / Michael A. Haber / No Comments
Former New York Rangers “Bad Boy” turned Dancing with the Stars Star Sean Avery is Arrested in NY on Drug Charges Pursuant to an Investigatory Traffic Stop for his having Thrown Objects at Moving Cars in his Neighborhood
Meet retired NHL (NY Rangers) “bad boy” Sean Avery.  That’s him below… 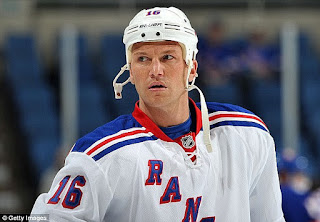 It seems that Sean and I share a pet peeve:  Getting pissed (and occasionally getting even) with motorists who speed through his Hamptons, NY village. 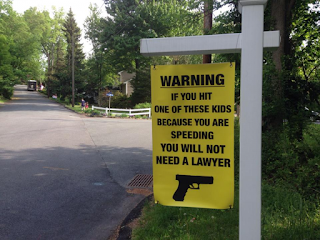 On September 28th, 2015 Avery was reported to cops for throwing objects at moving cars, and on September 30th, 2015 cops stopped Avery while driving his car to question him about the reports.  While he was detained police discovered a variety of prescription drugs (including acetaminophen with oxycodone and roxicodone) in his possession with their Rx labels.  Despite his insistence that the pills were prescribed to him Avery was arrested for illegal possession of the same. 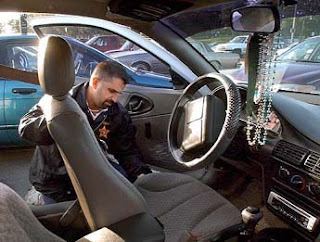 Avery was charged with several misdemeanor offenses including 4th degree criminal mischief and two (2) counts of 7th degree criminal possession of a controlled substance.  The arrest came just 11 (eleven) days before he was due to wed Sports Illustrated swimsuit model Hilary Rhoda in a Hamptons ceremony. 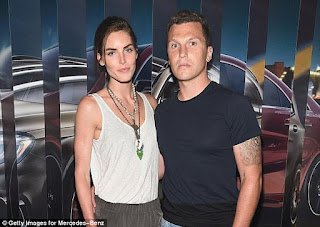 After his arrest Avery took to Twitter to post evidence that he had prescriptions for the drugs in question.  The post, below, shows a photo of a list of drugs that Avery is prescribed, including various prescriptions for oxycontin.  Along with the photo Avery wrote:  “Pretty disgusting I even have to do this but unfortunately it’s the same old story. Have fun with this one”, and his attorney, Edward Burke Jr., has backed up the claim in Avery’s tweet stating that:  “Mr. Avery has prescriptions for the medications that were the basis of this charge/” 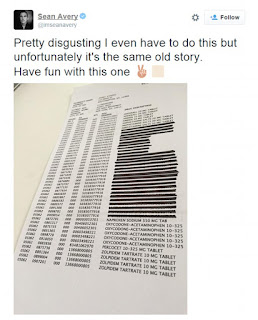 I understand Sean’s situation.  When my son was young we lived in a quaint, quiet residential neighborhood and strolled, and later walked with him daily.  Although we had many kids (and pets) in the neighborhood people flew trough there as if it were Big Daddy Don Garlitz’s practice track. 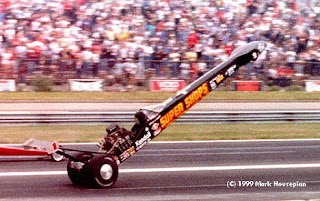 One day in particular I watched a guy get into a Vette, smoke the tires and take off northbound toward a cul de sac.  I knew that he had to return back toward me so I grabbed enough outdoor rolling garbage bins to block the street.  Then I grabbed both a huge rock and set my cell phone to video.  As the driver sped back south I stood off center, recording his driving pattern with my left hand and aiming the large rock toward the Vette in my right.  Rather than barreling through douche stopped, and I confronted him, recording the encounter, and squarely calling him out for his douche baggery.  I let him known in no uncertain terms that if I ever saw him do anything like that in my neighborhood again that I would not be gracious enough to stop him before he injured or killed a pet or a person or destroyed someone’s property; rather that I would abet the same by smashing a rock (such as the ominous one that I held) through his windshield as he sped past.  While being recorded he got the point.  Note that I am not advocating this sort of vigilantism, I’m just saying that I get it. 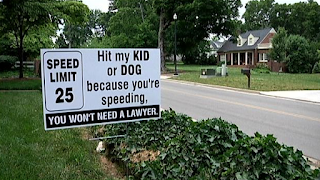 Memo to the Folks:  As to the drug charge, I cannot speak to NY law or procedure but in Florida, F.S. 499.03 makes it unlawful (a misdemeanor) to possess Rx meds without the Rx label:

499.03 Possession of certain drugs without prescriptions unlawful; exemptions and exceptions.—

Memo to the Folks continued:  This is a “softball” charge (i.e. for law enforcement it is an easy arrest) and it’s easily avoidable.  So, if for any reason you don’t want to carry your pills in their Rx container then do what I do in those circumstances:  Take a picture of the current, dated, Rx label and keep it handy on your cell phone.  If the roadside cop refuses to either look or listen then (respectfully) demand that a supervisor be summoned to the scene. 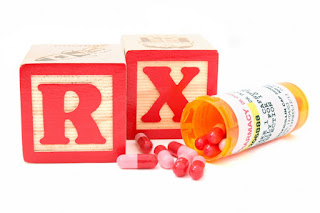 Memo to the Sean Avery:  Again, I completely understand your frustration and actions but I point out that you are lucky that NY treats it as a misdemeanor because in FL, throwing objects, whatever they may be, at moving vehicles is an automatic felony.  In fact, not only is at a felony but it is a 2nd degree felony, punishable by up to fifteen (15) years in state prison.

790.19 Shooting into or throwing deadly missiles into dwellings, public or private buildings, occupied or not occupied; vessels, aircraft, buses, railroad cars, streetcars, or other vehicles.—Whoever, wantonly or maliciously, shoots at, within, or into, or throws any missile or hurls or projects a stone or other hard substance which would produce death or great bodily harm, at, within, or in any public or private building, occupied or unoccupied, or public or private bus or any train, locomotive, railway car, caboose, cable railway car, street railway car, monorail car, or vehicle of any kind which is being used or occupied by any person, or any boat, vessel, ship, or barge lying in or plying the waters of this state, or aircraft flying through the airspace of this state shall be guilty of a felony of the second degree, punishable as provided in s. 775.082, s. 775.083, or s. 775.084. 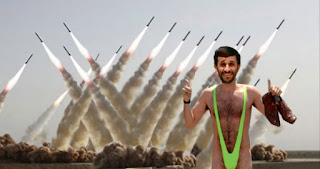