Social Media FAIL! Snapchat Snafu! Woman Accidentally Sends Naked Selfie Captioned “What ur missing this weekend ;-)” to Her Boss Instead of her Boyfriend ~ Call Michael A. Haber, Esq. @ 1-888-SHARK-8-1

Social Media FAIL! Snapchat Snafu! Woman Accidentally Sends Naked Selfie Captioned “What ur missing this weekend ;-)” to Her Boss Instead of her Boyfriend and the Boss Replies… Below is a partially nude late night… Scroll down to read more!

October 6, 2015 / Michael A. Haber / No Comments
Social Media FAIL! Snapchat Snafu! Woman Accidentally Sends Naked Selfie Captioned “What ur missing this weekend ;-)” to Her Boss Instead of her Boyfriend and the Boss Replies…
Below is a partially nude late night Snapchat selfie which was allegedly intended by an unnamed woman to be sent to her boyfriend but which instead was delivered to her boss. (In case you can’t see it too well the woman can be seen seductively lifting her shirt to reveal a breast and her stomach and the image is accompanied with the caption: “What ur missing this weekend :)”. 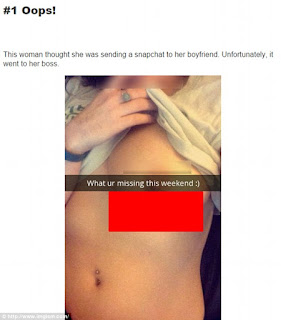 Not only did the woman mistakenly send the image to her boss but her boss actually penned a note and Snapchatted it back to her stating: “Hi, you probably did not mean to send this to me, but please be more careful. I am your BOSS.”  Not only did s/he capitalize the word “BOSS” but s/he also underlined it, perhaps to emphasise the severity of the situation. 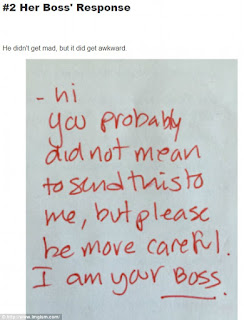 Snapchat reportedly has 100,000,000 users worldwide, many of whom are reported to be young people who use it to exchange sexy pictures. Memo to the Folks:  Please note that I am not advocating bank robbery but I am compelled to point out that had it not been for the Facebook pics and attendant bragging on social media it’s likely that John and Ashley would not be in jail and would be spending their loot.
Social Media provides the mechanics for rapid and global dissemination of information, forging bonds and deepening differences, and, like anything else, Social Media has it’s positives and it’s negatives.  It has brought folks together and it has been the imputes for folks to part ways.  It can help folks in a variety of ways but it can also hurt them, and this holds especially true as social media relates to criminal defense litigation.
As a routine part of my practice I have now made it a condition of representation that, during the course of a case, my clients must refrain from non-business related Social Media posts and commentary.  I also caution them to be careful about cell phone use, especially text messaging. Why?  Because, Clouds, “i” or otherwise, cell towers, and GPS signals all leave traces which can be used for both identification and evidentiary purposes, as do Social media feeds (any information which is connected to you), and your phones, tablets, pads and computers all contain potentially incriminating evidence.  Some of this is there for the taking, free and easily accessible to the public (which includes law enforcement) and some of this is accessible by subpoena, most especially things that you think that you have deleted but which in fact still exist in cyber-land.
The facts are that law enforcement (cops and prosecutors) can, and will, get their grubby paws on your texts, Social Media communications (posts, comments and pictures alike) and can track your whereabouts, with or without a subpoena, and any private citizen who wishes can save, store and deliver anything that they wish to either the cops or the prosecution without any constitutional consequence whatsoever.  Further, once armed with YOUR Social Media materials, if they are relevant to your case then the same will likely be admissible as evidence against your interests.
Consider the DUI manslaughter case wherein the Defendant had posted pictures of her/himself earlier in the evening doing shooters at a bar.  Or the domestic violence case where the Defendant texted her/his friend stating how angry s/he he was at the alleged victim.  Or the thief who posts pictures of her/his booty?  If you follow my blog then you have seen examples such as these, and worse, and, sadly, they will continue, as most folks simply don’t think about the potential consequences of their actions.
Here are a few recent examples which you can find on my blog:
1)    Bragging about Warrants:  A Texas man is arrested for bragging on Facebook about his sixteen (16) arrest warrants.
2)    Child Porn:  A stolen cell phone is traced to it’s prior owner after child porn images are found on the device.
3)    Theft:  iPad thieves post pictures which go to owner’s iCloud and lead cops to them.
4)    Animal Cruelty:  Arkansas hunters kills cats and post videos which lead to arrest.
5)    Guns and Child Abuse:  Social Media posts foil illegal gun sale and leads to video of couple baiting a baby to put a pistol in her mouth.
With that backdrop here are the 5 Rules:
Haber’s Social Media Rule #1:  Think BEFORE you post.
Haber’s Social Media Rule #2:   Once posted always posted.
Haber’s Social Media Rule #3:   Don’t post anything that you would not want your mother to read / see.
Haber’s Social Media Rule #4:  Cops literally troll the internet looking for folks who go to, look in, download from or upload to targeted (and usually, but not always “deviant”) sites.  They also conduct internet “stings”, posing as children or deviants and looking to bag anyone foolish enough to take the bait.
Haber’s Social Media Rule #5:  If it’s even remotely relevant to a pending charge then prosecutors will cram your social media posts, and history (sites visited, searches made, etc) down your throat in court.
Watch Michael A. Haber, P.A.’s Webisode on Social Media and the Law by clicking on the YouTube link below….
(Click here to access all 45 of Haber, PA’s Webisodes)

Social Media:  It’s all fun and nice until it’s introduced into evidence against you in Court. See “Haber’s Rules of Social Media # 1 – 5” at: http://habercriminallaw.blogspot.com/2015/02/social-media-and-criminal-justice.html 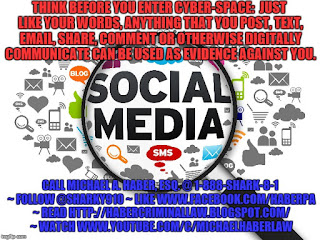