270 Pound Plus-Size Prostitute is Arrested in Sting Op after Offering an UnderCover Cop Oral Sex for $60 and some Nachos ~ Call Michael A. Haber, Esq. @ 1-888-SHARK-8-1

Your (Wasted) Tax Dollars at Work:  A 270 Pound Plus-Size Prostitute is Arrested in Sting Op involving at least 5 Cops after being Baited to Offer an UnderCover Cop Oral Sex for $60 and “some… Scroll down to read more!

December 7, 2016 / Michael A. Haber / No Comments
Your (Wasted) Tax Dollars at Work:  A 270 Pound Plus-Size Prostitute is Arrested in Sting Op involving at least 5 Cops after being Baited to Offer an UnderCover Cop Oral Sex for $60 and “some Nachos”
Meet 36 y/o Crystal Hotlosz, a plus-size prostitute from Youngstown, Ohio.  That’s her mug shot below…. 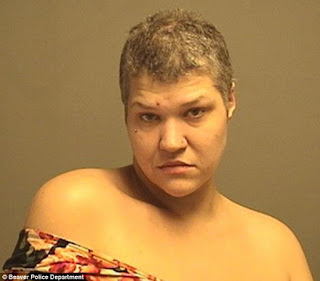 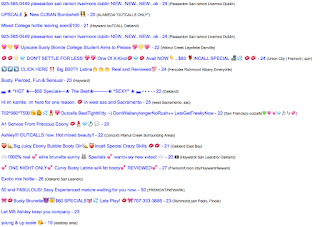 Coincidentally, upon seeing her ad Officer Beniston reportedly recognized Crystal from an ongoing narcotics investigation, and he was also aware that she had an open and active arrest warrant. 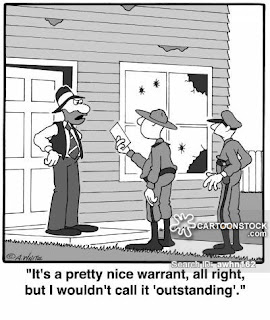 Knowing that this would be like shooting fish in a barrel Officer Beniston contacted Crystal via her Backpage ad and a text conversation ensued. 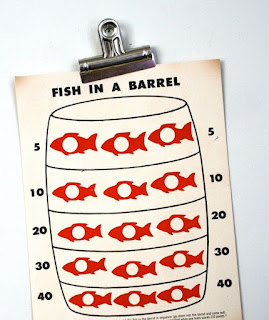 Texting morphed into a phone call and that call culminated in an agreement for a paid sexual rendezvous where Crystal would provide oral sex (a/k/a prostitution) if Officer Beniston brought a car (within which the act could occur), $60.00 and “some nachos”. 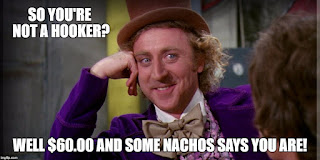 And so Officer Beniston sat in a car park outside a Mexican restaurant (with a host of eyeball and takedown officers in a perimeter), watched a vehicle arrive (being driven by a male), Crystal exit, approach and enter his unmarked vehicle.  Once inside his vehicle the plan was confirmed ($60.00 and some nachos for oral sex), Officer Beniston tendered the marked cash, Crystal accepted, the takedown signal was given, Crystal was arrested for Prostitution and her male driver was arrested for “promoting” prostitution. 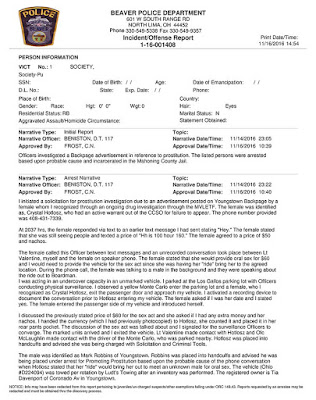 Memo to the Folks:  “Sting Op” is a law enforcement term that cops use when they embrace any of a variety of deceptive tactics to catch people who are predisposed to committing crimes.  Sometimes the cops do it themselves “undercover” and other times they employ CI’s (confidential informants) or CS’s (cooperating sources). There are many sorts of sting ops.  Some examples are: Posing as someone who is seeking illegal drugs, contraband or child pornography to catch a supplier; or posing as a supplier to catch a customer (where the cops are the suppliers it is called a “reverse sting”); Posing as a potential customer of illegal prostitution; or posing as a prostitute to catch a customer (again a “reverse stiong”);  Posing as a child in a chat room to identify a potential child molester; Posing as a hitman to catch customers and solicitors of murder-for-hire; Passing off explosives, fake or real, to a would-be terror bomber; Deploying a bait car (or a “honey trap”) to catch car thieves; Arranging someone under the legal drinking age to ask an adult to buy an alcoholic beverage or tobacco products for them; or even responding to ads on Backpage.com …   Most folks who are caught in a sting think they were entrapped but very few actually were.   The fact is that cops are permitted to  use methods of persuasion, trickery or subterfuge in an effort to get you to commit a crime.  The question that determines whether or not you were entrapped is: Would you have done what you did if a civilian had been involved instead of the cops?  Please watch HaberPA’s VideoFAQ / YouTube Webisode on “ What is a Sting Operation?” by clicking on the video link below:
When it comes to the subject of “Cops, Courts and Constitutions” you should always have a skilled and experienced criminal defense attorney who is focused on serving your interests.  While we can’t stop the cops from arresting you, as your legal counsel Michael A. Haber, PA will ensure that your rights are respected from the moment that representation begins and that any abuses which may have occurred beforehand are remedied.