While would-be Thieves were Swapping Price Tags their Chihuahua was OD’ing on Heroin in their Car, Cops & a Vet saved the Puppy ~ Call Michael A. Haber, Esq. @ 1-888-SHARK-8-1

Theft Suspects ask Investigating Police Officer to check on their Chihuahua-mix who they had left in their Car and Cops find the Puppy “Near Death”, having Overdosed on Heroin… Amazing Timing Allowed a Local Vet… Scroll down to read more!

March 28, 2017 / Michael A. Haber / No Comments
Theft Suspects ask Investigating Police Officer to check on their Chihuahua-mix who they had left in their Car and Cops find the Puppy “Near Death”, having Overdosed on Heroin… Amazing Timing Allowed a Local Vet to Save “Lucky” with Anti-Opiate Medication
Meet 46 y/o Thomas Romero and 38 y/o Nina Crawford of Carrollton, TX.  That’s them below… 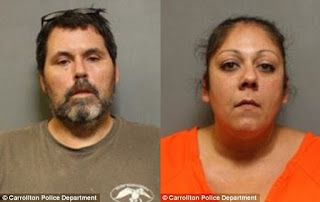 This dynamic duo were caught at a Home Depot swapping price tags and when cops arrived to investigate their attempted theft they asked if the officer would be kind enough to check on the 4 month old Chihuahua-mix puppy that they had left inside of their car.  And so, in a… 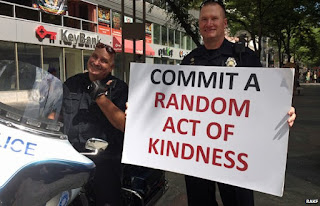 (yes… in a “random act of kindness”) the officer went out to the pick-up truck and discovered the puppy laying on the floorboards of the vehicle, described as “whimpering” and looking “near death”, and it didn’t take the cops long to figure out the “why” of things:  Per a police spokeswoman:  “There was drug paraphernalia… Eventually we did find drugs in the car…”, and so officers rushed the critical pup to the North Texas Emergency Vet Clinic. 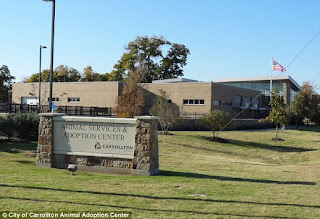 Veterinarian Stacy Fowler, who treated the puppy, determined that the puppy had ingested opiates and was essentially suffering from a heroin overdose.  Per Dr. Fowler:  “He was extraordinarily lethargic, almost comatose, barely breathing, his heart rate was very, very slow, his body temperature was really low.  He was really on the verge of not breathing. If he’d not received treatment he would’ve stopped breathing.” 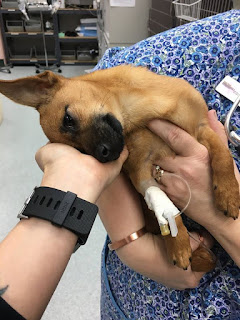 Police named the pup “Lucky”, and, due to a combination of their quick response time and Dr. Fowler’s expertise Lucky was saved and will make a full recovery. 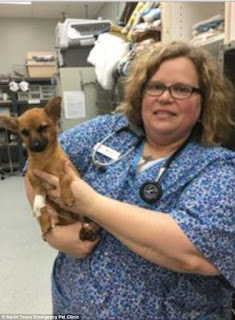 Thomas an Nina… not so much.  They were arrested and booked on charges for heroin possession and for fraudulent destruction, removal, or concealment of writing (for allegedly switching price tags).  They will also likely face animal cruelty charges. 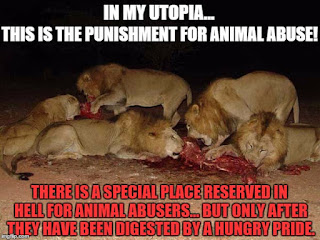 The Carrollton Police Department posted a pic of lucky on it’s Facebook page (you can access that by clicking here) with the caption:
ONE TOUGH PUP!
Our many thanks today to Dr. Stacie Fowler and the staff at North Texas Emergency Pet Clinic for nursing this honorary K-9 back to health.
A-shift patrol officers found the puppy suffering from a drug overdose Saturday. Pup was left in the floorboard of a truck in the Home Depot parking lot while its humans were busy inside switching price tags.
Humans were arrested for heroin possession and for fraudulent destruction, removal, or concealment of writing. Puppy is on way to full recovery from opiate overdose and is back in the care of The City of Carrollton Animal Adoption Center.
… and several people on the police department’s Facebook page have expressed interest in adopting Lucky. 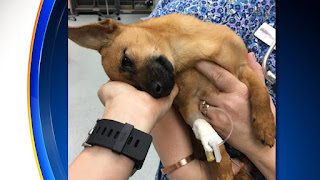 Memo to Thomas Romero and Nina Crawford:  I am a cat guy.  Yes I like dogs.  Most specifically I like big dogs.  And while Chihuahua’s are not big dogs (they are barking rats), as an animal lover I still have compassion for them.  In point of fact, and not withstanding my career choice, I still have much more compassion for Lucky than I do for either you douche bags.  Still, you are entitled to a defense and to a defense lawyer… just not this one. 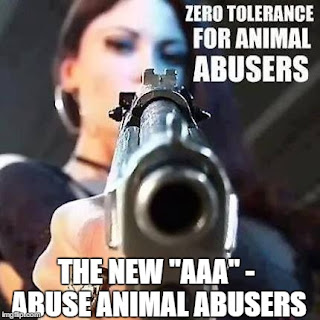 Memo to Thomas Romero and Nina Crawford continued:  You are are fortunate that Lucky survived, and that may well be a difference maker in your cases.  If your lawyer can’t find anything else to work with at least there’s that. 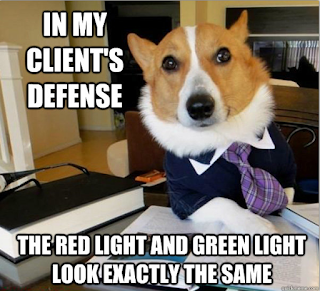