Video Voyeurism FAIL!:  A Utah Couple are easily Found and Arrested after their $1,200.00 Drone was Recovered and it’s SD Card Revealed Footage of Neighbors in their Bathrooms and Bedrooms, coupled with unmistakable Footage of… Scroll down to read more!

April 12, 2017 / Michael A. Haber / No Comments
Video Voyeurism FAIL!:  A Utah Couple are easily Found and Arrested after their $1,200.00 Drone was Recovered and it’s SD Card Revealed Footage of Neighbors in their Bathrooms and Bedrooms, coupled with unmistakable Footage of the Owner Operating the Drone plus their easily attained Registration Information
Meet 34 y/o Terisha Lee Norviel (reportedly a mother of six kids) and her beau, 39 y/o Aaron Dennis Foote.  That’s them below (Aaron in his Orem, Utah Police mugshot and Terisha reportedly from Facebook… sorry but I couldn’t find her mugshot.) 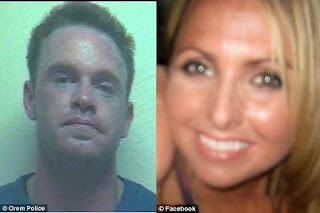 The couple were arrested in January, 2017 after a citizen called the Orem, Utah Police Department to report that he had captured a drone which he had observed flying just outside of his bathroom window, which he followed down the street, saw it land, grabbed it, took it home, reviewed the footage on the SD card and observed multiple videos of naked people in their homes and apartments, as well as footage of the drone operator and his truck. 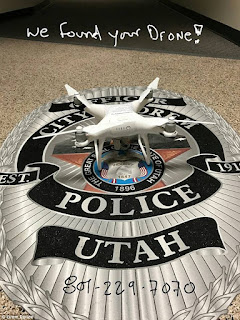 After the device was turned over to police they secured a search warrant (see below) and were quickly able to positively identify the drone operator as Aaron Dennis Foote by way of his vehicle registration.

The drone reportedly had captured video of people in their homes in early morning hours just after they had woken up. Police have reportedly said that it appeared that the pilot had hovered the drone near windows waiting for lights to turn on so it could film inside.  Once the Orem Police had Aaron in their sights they took to Facebook, apparently having a little fun and hoping that he would turn himself in (as opposed to them having to “collect” him – you can see the Orem PD’s Facebook post either below or by clicking here), posting, among other things:  “Would you like to turn yourself in before we have to come knocking at your door, maybe on Christmas morning, with a warrant?.  We know who you are but let’s make this easier on everyone!” 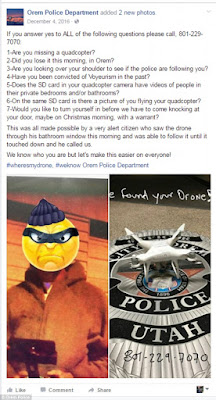 I do not know the any specifics as to why Terisha (again, reportedly a mother of 6 and also a real estate agent who was in the process of divorcing her husband at the time of the incidents) was arrested along with her beau, but she was arrested and so there must be some evidence of her complicity.  Terisha and Arron (who reportedly has a prior voyeurism arrest) were both charged with “voyeurism by electronic equipment”, or, as we call it in FL, “video voyeurism” (a/k/a being a “digital Peeping Tom”). 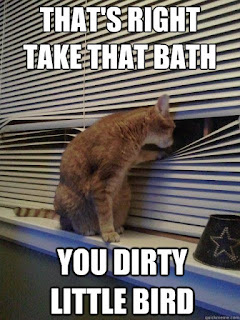 Memo to the Folks:   Common synonyms for “voyeur” are “Peeping Tom” and “pervert”, and voyeurism is loosely defined as secretly spying on others while they are engaged in intimate behaviors, such as getting undressed or during some form of sexual activity.  I can’t speak to Utah but in FL you violate F.S. 810.14 and you are a voyeur if you: 1)  Secretly observe another; 2)  With a lewd, lascivious or indecent intent; 3)  While the person being observed had a reasonable expectation of privacy. In FL the terms “lewd, lascivious and indecent intent” all mean “a wicked, lustful, unchaste, licentious, or sensual intent on the part of the person doing the act”. If you are convicted of voyeurism in Fl then you have committed a 1st degree misdemeanor (which is punishable by up to 364 days in jail) and if you have 2 prior voyeurism convictions then your 3rd charge will get you  bumped up to a 3rd degree felony (which is punishable by up to 5 years in prison). 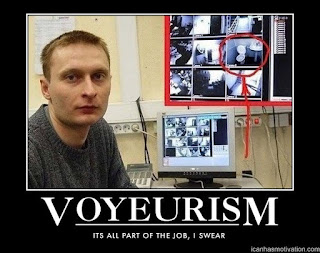 Memo to the Folks continued:   Video Voyeurism is found at F.S. 8190.145 and in order to be convicted the State must prove the following 4 elements:  1) You either used or installed, or you permitted to be used or installed, a device that is used to secretly view, broadcast or record, for your own or another’s amusement, entertainment, sexual arousal, gratification or profit, or to degrade or abuse the person being recorded; 2) That the victim was viewed, broadcast or recorded at a time when the victim’s body was privately exposed; 3) That this occurred at a place and time when the victim had a reasonable expectation of privacy; and 4) That the viewing, broadcast or recording was done without the victim’s knowledge or consent.
“Broadcast” means electronically transmitting a visual image with the intent that it be viewed by another person.  “Imaging device” means any mechanical, digital, or electronic viewing device, still camera, camcorder, motion picture camera, or any other instrument, equipment, or format capable of recording, storing, or transmitting visual images of another person.  “Place and time when a person has a reasonable expectation of privacy” means a place and time when a reasonable person would believe that he or she could fully disrobe in privacy, without being concerned that the person’s undressing was being viewed, recorded, or broadcast by another. And “Privately exposing the body” means exposing a sexual organ. If you are 19 or younger then video voyeurism is a 1st degree misdemeanor (punishable by up to 364 days in jail) but if you are over 19 then it’s a 3rd degree felony (punishable by up to 5 years in prison). 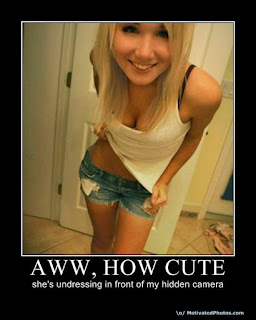 Memo to the Folks:   HaberPA has a YouTube Channel (which you can access by clicking here) that features a variety of criminal defense, DUI and BUI related VideoFAQ / Webisodes, two of which (that are presently in production and which will be published before the end of March, 2017 are entitled “What is Voyeurism in FL?” and “What is Video Voyeurism in FL?”.  I encourage you to watch and to SUBSCRIBE to HaberPA’s YouTube Channel by either clicking here or by clicking on the video link below.
(Click here to SUBSCRIBE to HaberPA’s YouTube Channel!)