A Miami Man is Arrested for Impersonating a Cop for using a Fake Cop Car to Pull Over a Real Police Officer in an Unmarked Vehicle ~ Call Michael A. Haber, Esq. @ 1-888-SHARK-8-1

May 15, 2017 / Michael A. Haber / No Comments
Police Impersonation Snafu:   In an Impossible and Self-Anointed Vigilante Bid to Rid the 305 Streets of Texting Drivers & Speeders, another would-be Fake Cop Pulls over a Real Miami-Dade County, FL Police Officer, landing himself in Jail with Felony Charges…
Meet 46 y/o Marcos Pacheo-Bustamante.  That’s his mug shot below… 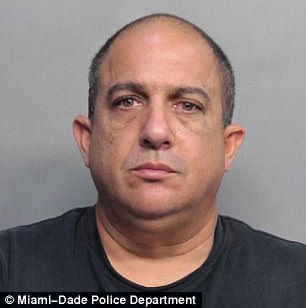 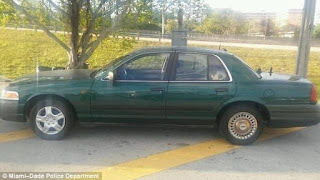 … especially as it is equipped with various antennae… 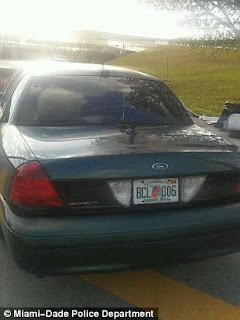 …and as it is (er, was) wired with hidden strobe lighting. 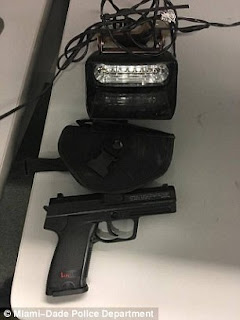 The gun and holster that you see below to strobe lights which were removed from the Crown Vic were found inside of the vehicle.  Although most folks would not know from looking at it, especially in a fleeting glace, it is actually a BB gun, but one which Marcos reportedly had routinely employed as a prop to complete his law enforcement persona. 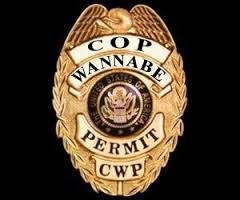 With that background here is tale of Marcos Pacheo-Bustamante, a/k/a the latest Miami Traffic Patrol vigilante:  At about 7:00 am on Friday, April 14th, 2017 Marcos was cruising northbound on I-95 in his Crown Vic, and, unbeknownst to Marcos, just in front of him was Miami-Dade County Police Officer Alton Martin, in full police uniform and driving an actual unmarked police vehicle.  Officer Martin first noticed Marcos in his rear-view as the Crown Vic did a rapid lane change and activated it’s alleged emergency equipment.  Officer Martin, believing that one of his colleagues was stopping him, pulled over to the shoulder of the Interstate. 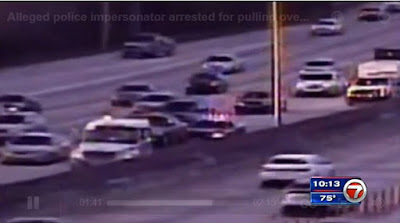 As to what happened next, I do not know who was more surprised…  was it Officer Martin, when he discovered that he had been pulled over by a fake cop or was it Marcos when he saw a fully uniformed Officer Martin exit his vehicle and walk toward the Crown Vic?  Perhaps they were both equally, albeit differently, perplexed… 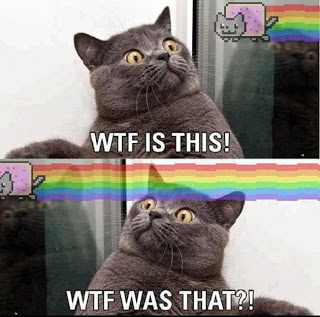 Regardless, things rapidly escalated, or deescalated depending upon your vantage, from there.  Being a legitimate Police Officer, Officer Martin saw the situation for what it was and immediately arrested Marcos under F.S. F.S. 843.08 for “False Personation” of a Law Enforcement Officer, and his fake law enforcement officer self was take to a real jail in a real police squad car by real police officers. 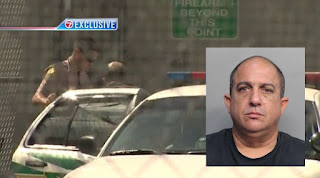 After he was arrested, Marcos was interviewed and he reportedly confessed to the crime.  Detectives reporte that Marcos admitted to playing “traffic cop” because he was “fed up with all the people that were speeding and texting on Interstate 95”. Detectives also reported that  the BB gun which was discovered inside the fraudulent police vehicle looked a lot like a real gun and that it had a holster.  According to Channel 7 / WSVN News one f Marcos’ neighbors told the news station that they had seen Marcos walking around with his gun holstered on prior occasions. 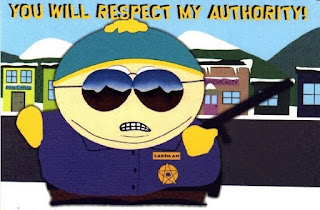 Memo to the Folks:  F.S. 843.08 makes it a crime for you to hold yourself out to be a law enforcement officer AND, while doing so, to pretend to do something in the capacity of a law enforcement officer.  It is not enough that you wear a shirt or a hat that says “POLICE” or even that you have a badge or a ballistic vest… it is what you do with those items that will differentiate between you exercising of your 1st Amendment right and your committing the crime of falsely personating a LEO.  So if I’m wearing my super cool police muscle t-shirt at the supermarket and someone asks me if I’m a cop and I say yes I have not committed a crime.  I may be a liar and a BS artist, but I have a 1st Amendment right to go that far.  But, if I ratchet it up to the next level by taking any action as if I were a cop – like asking the person for identification, or by trying to conduct a frisk – well then the 1st Amendment line has been crossed and a real cop would be justified in arresting and informing me my other constitutional rights.  Falsely personating a LEO is a 3rd degree felony punishable by up to 5 years in state prison, but if you do so during the commission of a felony (like, for example, you commit a burglary or a robbery while dressed as a cop) then the crime is enhanced to a 2nd degree felony that is punishable by up to 15 years in state prison.  You can watch HaberPA’s VideoFAQ / YouTube Webisode on “What is False Impersonation of a Law Enforcement Office in Florida by either clicking here or clicking on the video link below.
Memo to the Folks: And you can watch any or all of HaberPA’s 184 (at present) Criminal Defense, DUI and BUI related VideoFAQ / YouTube Webisodes by clicking here.  I also respectfully encourage you to SUBSCRIBE as we’re always putting out more.  And, if you have a FL based ‪‎CriminalDefense‬, DUI or BUI‬ question that you would like for Michael A. Haber, Esq. to address and answer then please SUBMIT YOUR QUESTIONS by email to [email protected], call or text 305-798-2220 or message “Miami.Criminal.Lawyer” on ‪#‎Facebook‬ or @Sharky910 on ‪#‎Twitter‬) and Michael A. Haber, Esq. will try to provide you with a video answer on a new HaberPA Webisode!

(Click here to subscribe to HaberPA’s VideoFAQ / YouTube Webisode Channel.)
Memo to the Folks:  Falsely personating – or impersonating – a police officer is a serious matter.  It’s not so much a worry as an inconvenience when it comes to self-anointed would-be cops like Marcos but it is when it comes to more serious matters, such as using color of office, police accutriments and law enforcement paraphernalia to commit other crimes, like burglary, robbery, home invasions, carjackings, etc..  It’s important to be equally mindful that, with the ease of acquiring police gear online there are many potential fake cops out there, but also that there are many undercover and not obvious real cops on the streets as well.  So, if you have any question as to the legitimacy of the person who is trying to pull you over (because they’re not in a traditional police squad car or for any other reason) or who is attempting to enter your home or place of business then feel free to NOT STOP or to DENY THEM ENTRY, but be sure to simultaneously call 911 and report the incident to dispatch.  If the cop is legit then 911 will advise you (and there will be proof of your intentions) and if it is illegitimate then real cops will be dispatched. 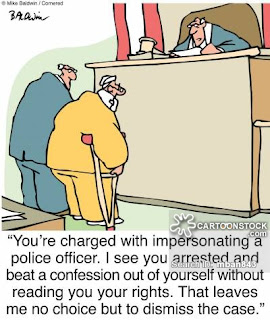